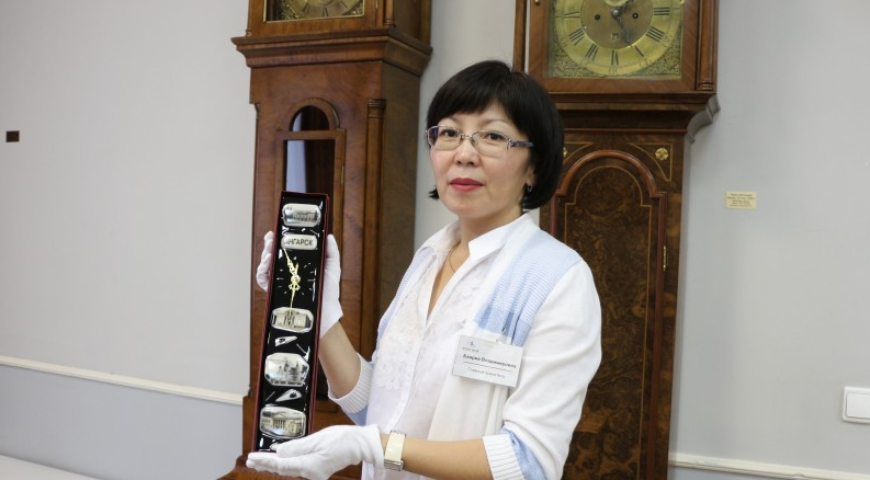 A new exhibit appeared in the Angarsk Museum of Hours

The memory day dedicated to the 109th anniversary of the founder of the Museum of the Clock, Pavel Vasilyevich Kurdyukov, was held on the eve of the weekend.

As a gift to the Museum from the administration were sent watches, which are released in limited edition. On them – pictures of Angarsk. Now the clock will take its place in the exposition of the museum.

On behalf of Mayor Sergei Petrov, Marina Sasina congratulated Valentina Borisovich Mandro, a follower of Pavel Vasilyevich Kurdyukov, watchmaker of the master who has been working at the Museum for 27 years with the 80th anniversary.

For reference. The clock museum in the city of Angarsk was opened in 1968 and became the first museum of watches in our country. The basis for its creation was the collection of Pavel Vasilyevich Kurdyukov (1908-1985), which was formed over more than 50 years.

In 1969, the Angarsk executive committee decided to organize a city museum.

The first 200 hours were located first in one small hall. The further formation of the museum collection was carried out in stages.

The exhibits are the gifts of Pavel Vasilyevich Kurdyukov, visitors and admirers of the museum.

The collection of watches is very diverse and interesting, now it has more than 1300 exhibits: the clock of the XVIII – the beginning of the XX centuries of the countries of Western Europe, Russia, Japan in cases of bronze and marble, porcelain and wood.

Since 1993, the museum is in a specially renovated building for him on the street Karl-Marx, 31. Since October 2001, the Museum of the Clock is named after Pavel Vasilyevich Kurdyukov.