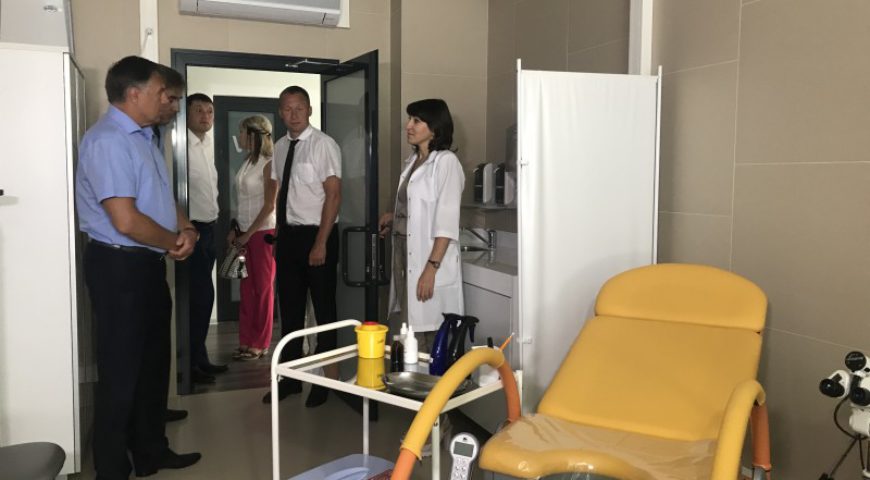 The family Wellness centre in the 30th district was opened in 2016. There is a swimming pool with bowls for all age groups: adults, children and infants. In the pool there is a modern water treatment system in accordance with the latest safety requirements. There is also a salt cave, a massage room and other services, thanks to which you can strengthen the body’s defenses and get unique treatments.

The Angara family health centre also has a medical unit. It was opened in March 2017. Ophthalmologists, otolaryngologists, neurologists, endocrinologists, gynecologists, cardiologists for children and adults are receiving here.

The mayor noted that in addition to modern equipment, the center pays attention to details for a comfortable stay of visitors.

“Health care in the field of entrepreneurship is not popular. In other areas of business, money works more effectively.  This kind of activity is interesting to people with special psychology, with the thinking directed on preservation and strengthening of health of a family, care of children. This is in demand among citizens and prestigious for the territory”, – said Sergey Petrov, summing up the trip.

“Local house of culture” – a new large-scale project of the United Russia party to support rural clubs and houses of culture. It is aimed at the development and renewal of the material and technical base of rural clubs and houses of culture.  In small towns, such institutions are often the only center of additional education of children and adolescents, leisure, preservation and development of folk art. United Russia party has initiated the allocation of funds from the budget for the modernization of these facilities and offered the public a mechanism for joint work on the project, which makes it transparent, targeted and taking into account the opinion of residents. The Federal project is designed for three years.

In the Federal budget for 2017-2019, at the initiative of the United Russia faction, the state Duma provides for an additional type of state support – subsidies to ensure the development and strengthening of the material and technical base of municipal houses of culture. In 2017, 1 billion 400 million rubles were allocated for these purposes in the Federal budget. Irkutsk region will receive more than 23 million on 47 clubs that have passed the competitive selection. The project will be co-financed from the Federal, regional and local budgets.

DK “Odins” successfully passed the competitive selection. At the expense of the program, it is planned to purchase sound and lighting equipment, as well as musical instruments and stage costumes.

“We plan to improve the material and technical equipment, including the purchase of music and lighting equipment to be able to hold street festivals in the village at the appropriate level and to preserve and develop the heritage of Buryat culture, “-said the Director of the DC” Odinsk ” Tatiana Konyukhova.

Irkutsk region is the only territory in Russia, where for several years the regional target program “100 model houses of culture – Priangarya”has been implemented. This means that the rural houses of culture to the Federal subsidies will also receive funds allocated for the implementation of the program. In total, more than 70 million rubles will be allocated for the development of municipal recreation centers this year.

“DK “Odins” participates in both programs. According to the second plan, it is planned to buy national Buryat costumes and shoes for performances of dance and vocal groups, scenery, inventory, furniture. Also in the regional program “100 model houses of culture — Priangarya” this year entered the house of culture in Kitoe. On regional means the scene of DK “Forester” will be equipped, – told in Management on culture and youth policy of administration of the Angarsk city district.