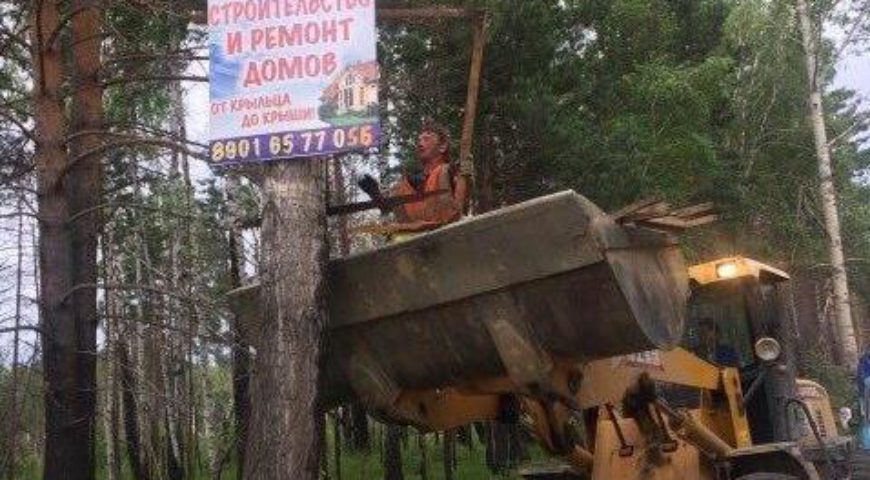 Experts of the Committee on municipal property management and other relevant departments administratiivse attention to flyers, banners and streamers, posted on the buildings, window openings, on the trees. Such advertising is illegal, for placement violators face a fine.

“The mayor has set the task to eliminate unauthorized advertising in the city. There are permissible norms, and there are obvious violations. We appeal to entrepreneurs: without waiting for the report of the Commission, inspect the facade of your premises for compliance with the rules and do not paste ads in places not intended for this purpose,” — said during the RAID, the specialist of the Department for municipal property management Vladimir Vysotsky.

Note that in the fight against offenders in the sphere of the sanitary condition of the territory at the phone number specified in your account is the system of “Redial” — every three minutes a warning about the violation.

For two summer months of the current year as a result of the raids carried out by administration of the city district, the Commission on Affairs of minors, together with the staff of UMVD, the Ministry of emergency situations of the Russian Federation, on water objects of the Angarsk city district 218 minors unaccompanied were revealed. Information on children who were on reservoirs without supervision, the Commission on Affairs of minors of administration of AGO is transferred to managements of education. Heads of educational institutions of the city district will carry out preventive work with parents and children to prevent minors from being out of control. In case of re-identification, the issue of bringing parents or legal representatives to administrative responsibility for improper performance of child-rearing responsibilities will be decided.

“Often parents do not even know where their children are. Be vigilant. Do not allow children to stay in water without adults. Minors may only be bathed under the continuous supervision of their parents or legal representatives in strictly defined places. On the territory of the Angarsk city district is the only authorized place for swimming – elovsky pond. Neglect on your part can lead to tragedy,” — said the chief specialist — Secretary of the Commission for minors Alexander Golubchikova.

Recall that this summer, killing two children, residents of Angarsk municipal district. One minor drowned in one of the quarries in the mega. In July, a 10-year-old boy drowned in the river Kitoy.

takes an active part in the implementation of measures to improve the business environment in the region. Mechanisms to simplify administrative procedures and improve the business environment have been worked out in the Irkutsk region for several years. In 2017 in the framework of this work implemented in the Angara region of the target model facilitation of doing business and increase investment attractiveness of the region.

Target models were developed on behalf of the President of Russia and approved by the order of the government of the Russian Federation. In accordance with the order, 12 models are being implemented in the main areas that most strongly affect the improvement of the business climate. One such area is the cadastral registration.

“The cadastral registration model provides all the steps that applicants face in practice in the acquisition and registration of real estate. Moreover, the target model covers the entire sequence of actions that the applicant carries out to obtain a site, building or structure – from the moment of selection of real estate to its registration. This detailed study will track each stage of the acquisition of real estate and identify emerging problems. This will help to reduce administrative barriers and reduce the time in the provision of public services”, — said the Director of the branch of the Federal cadastral chamber of the Irkutsk region Tatyana Tokareva.

Also an important indicator of the convenience and ease of obtaining public services is the growing share of requests for services of the Federal registration service in the offices of Multifunctional centers. By the end of 2017, the cadastral registration model established an increase in the share of service provision on the basis of MFC to 70%. In March, this indicator in the Irkutsk region already amounted to 73%.

“Despite the fact that the procedures for cadastral registration and registration of rights within the competence of the Federal registration service, are final in the registration of real estate, the Cadastral chamber of the Irkutsk region is actively involved in the implementation of target models in these areas. We will continue to work to increase the share of Agency services received in the IFC offices and electronically. We will also continue to cooperate with the authorities on the establishment of the boundaries of municipalities and settlements. This will help to implement all planned activities in the territory of priangarya to increase the investment attractiveness of the region”, — said the Director of the branch of the Federal cadastral chamber of the Irkutsk region Tatyana Tokareva.